There are so many ways to describe Abingdon. Historic. Scenic. Charming. Artistic.

Let’s just sum it all up by saying that Abingdon is a fun place to visit. The mountains that surround the town beckon visitors to get outdoors and enjoy the fresh air and spectacular scenery. The downtown district with its brick sidewalks and tree-lined streets entice visitors to explore every block and visit every shop, restaurant and café. That’s what old-fashioned southern hospitality is about.

The Abingdon Convention & Visitors Bureau is here to help

We can help you plan your next trip, whether you are a meeting planner, a group tour operator, or simply looking for the perfect weekend getaway. Contact us today!

The Visitor Center is located off exit 17

You can find your way into downtown Abingdon from three different exits on I-81 or from several state routes including scenic routes 11 and 58. Abingdon is located just 15 miles the Virginia-Tennessee border in the beautiful Blue Ridge Mountains of Virginia. It’s a quick, easy and totally worth it drive, from:

Get directions to Abingdon

The History of Abingdon

The site of present-day Abingdon is located on a well-traveled wilderness route called the Great Road, which many pioneers traveled through the Blue Ridge Mountains on the way to settle the new American frontier. In 1748-1750, the land was surveyed by Dr. Thomas Walker, who would later be partners with Peter Jefferson – father of Thomas Jefferson – in the Loyal Land Company. According to local legend, the area was named Wolf Hills by Daniel Boone in 1760 after his dogs were attacked by a pack of wolves.

The Town of Abingdon was established by an act of the Assembly of Virginia in 1778. Two short years later, Abingdon played a role in helping the young nation gain its independence. Patriots from Virginia and North Carolina gathered at the Muster Grounds to begin a 300-mile march to Kings Mountain, South Carolina. The ensuing battle was a turning point in the Revolutionary War.

In 1860, Martha Washington College opened in a former private residence in Abingdon. The college closed in 1932, but the grand building affectionately known as “The Martha” re-opened as a hotel in 1935.

Director of Economic Development and Tourism

Get the Visitor's Guide 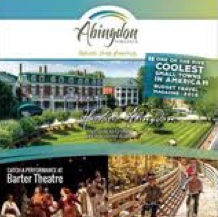